USD bulls are positioning for a hawkish Federal Open Market Committee (FOMC) meeting on 21 September. DXY appreciated 0.7% to 109.76 last week (ended 16 September), its highest weekly close since June 2002. After the stronger-than-expected US Consumer Price Index (CPI) in August, we see the Fed Funds Rate rising a third time by 75 bps to 3.25%, turning restrictive above its estimated 2-3% neutral range. Following the last FOMC in July, the US Treasury 2Y yield has risen from 2.86% to 3.40% at Jackson Hole in August to 3.87% last Friday. Markets fear the Fed wants rates to be more restrictive above 4% before it pauses in 2023. All eyes will be on the Summary of Economic Projections and Fed Chair Jerome Powell’s post-FOMC press conference.

The USD’s strength poses a challenge to the rest of the world. Other central banks see depreciation in their currencies adding to price pressures. The European Central Bank (ECB) and the Bank of Canada (BOC) have responded with 75 bps hikes this month to cushion their currencies, not so much against the greenback but on an effective exchange rate basis. EUR/USD is weak around parity. The ECB sees several more hikes for European Union rates to be neutral. This is not good considering that US rates will be above neutral this Wednesday (21 September). Although the BOC’s policy moves have (more or less) paralleled the Fed’s, the USD’s strength still drove USD/CAD above its price channel to 1.3264, its highest close since October 2020.

We expect the Swiss National Bank (SNB) to also deliver a 75 bps hike to 0.50% on 22 September. However, SNB’s jumbo hike will only end negative rates in Switzerland on Thursday, one day after US rates turn restrictive. USD/CHF has bounced off its firm support level at 0.94 to 0.9650 and is eyeing the highs around 0.98 this quarter.

GBP could end 2022 on UK’s weak fundamentals. GBP closed last week at 1.1420, its cheapest level since March 1985. Thoughts are on 1.0520, the pound’s all-time low in February 1985. As per CFTC data, speculators racked up the largest short GBP positions since late April. On 22 September, the Bank of England’s (BOE) second 50 bps hike will pale compared to the Fed’s third 75 bps hike a day earlier.  Even if the BOE surprises with a 75 bps hike, it is unlikely to help the pound. Markets are convinced the UK economy will enter recession from 4Q22 into 2023, one quarter after the US economy exits its technical recession.

Since the last BOE meeting on 4 August, the 10Y Gilt yield has surged to 3.14% from 1.89% on fiscal worries. Chancellor Kwasi Kwarteng will present the mini-budget one day after the BOE meeting. He will announce GBP30b of tax cuts to ease the cost-of-living crisis and to support economic growth, one week after Prime Minister Liz Truss declared energy price caps. However, the market will be more interested to understand how the Truss government intends to fund the wider fiscal deficit. 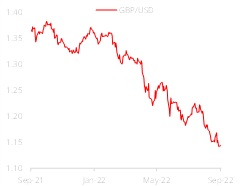 There has been significant angst across assets as market participants re-assess the Fed’s rate hike path after a grim inflation print last month. This week (ending 24 September) might be particularly challenging as stresses build into the Federal Open Market Committee (FOMC) meeting (the outcome is due 22 September, 2am SGT). The market is pricing in a significant chance of a 100 bps hike. We do not sit in this camp and still see the Fed hiking by 75 bps, taking policy settings into restrictive territory. With labour market data (including NFP, jobless claims) and Consumer Price Index (CPI) still scorching (8.3% y/y in August), there are no fundamental reasons why the Fed should sound dovish. Lastly, while financial conditions have deteriorated, they are probably not dire enough for the Fed to back off. It would probably require a further drop in the stock market and /or a widening of credit spreads to generate sufficient negative feedback (similar to June) to drive yields lower.

Economic projections will be closely scrutinised. Unfortunately, even as the market has clearly become data dependent, the immediate path of the Fed will still be dictated by what the Fed puts in the dot plot. We think that the Fed might put a terminal rate of 4.5% in 2023 with cuts only featuring in 2024. The longer-term neutral might get pushed up to 3% (up from 2.5% currently). We think 2025 will mark a return to the long-term neutral. The unemployment rate needed to generate a fall in inflation back towards 2% and the time to get there will also be important.

While the terminal rate is a moving target, the Fed has to choose between two paths - frontload very aggressively or downshift and extend the cycle somewhat. While a resilient economy and hot inflation argues for more frontloading, we think that holds insofar as policy settings are loose, but perhaps less convincing when implied real yields are already firmly tight (2Y implied real yields have climbed rapidly and are close to our target of 1.5%). At this point, we are not convinced that the pace of rate hikes should be sped up even more. Tactically, receiving 2M, 3M rates might make sense. We would also fade the cuts in 2023 relative to peak pricing in 2Q23. We currently think a slightly gentler glide path makes the most sense.

We think there will be some upside to USD rates with the FOMC a key risk event. Timing wise, a local peak in fear could be hit around FOMC day. However, we do note that the 30Y (implied real 1% yield) is proving to be sticky around 3.50% (around our forecasts). In so far as the market does not see the Fed losing control of inflation, upside might be limited, even if the Fed does hint of MBS sales.

Curve wise, we think the 2Y/10Y and 2Y/30Y can be inverted for an extended period. Recession risks are unlikely to fade in the near term. The more aggressive the Fed goes, and the higher the terminal rate, the larger the degree of plausible inversion. Under the current assumption of 4% peak Fed funds rate, we think the 2Y/10Y should not invert much more than 45 bps. However, if this shifts to 4.5%, -60 bps might become the new floor.

Lastly, receiving 2Y/5Y/10Y fly on recession fears looks more interesting again. The upshot? Conditions are not ripe yet for a Fed downshift. While CPI inflation has peaked, it is grinding down very slowly amid a firm labour market. Steepening plays (5Y/30Y) might be a tad premature. It might be better to await clearer signs, perhaps in 1Q23, that the Fed will be able to downshift. What are Mutual Funds and Equities? What do economic indicators mean to your portfolio

Benefits and disadvantages of balanced funds

Talk to a DBS Expert